Why can’t Christians see the supernatural bible changes that we see?

“A greedy and adulterous generation seeks after a sign but no sign will be given, save the sign of the prophet Watchman Jonah.”  Just as Jonah was a watchman to Nineveh so too the watchman on the wall on Youtube proclaim the coming days of God’s wrath and end of days at hand to the people.  Yet these watchmen are not privy to the miraculous signs and wonders of prophecy that the chosen few can see happening in real time.  See Jazweeh A-Z Prophecy article for more on that.

Most people walk in self delusion never finding out who they are deep within their heart of hearts.  It the human failsafe when threats arise.  The lie is the #1 defense of the American people.  Of course they likely are unaware of it.  Its the programming.  In many ways it’s not their faults that they prefer deception over Truth.  The beast has done its job very well.  It takes seeking God with one’s whole heart mind and soul to break free of the Beast system self deception.

What accompanies the mark of the beast once a man has chosen his allegiance is the Locust from the pit.  The covenant with many, come to find out was a pact made between powerful ruling class men/woman & Demonic ruling class demons.  On right Mark of the beast consummates with men’s faces & the forehead mark.  On left the Locust.  Though it has no legs.  Its a shadowy invisible parasitic creature that lurks in the abyss.  Prior to the agreement with Hell that men made these creatures had to be invited into a man.  A spiritual door had to be opened, before the covenant with many. 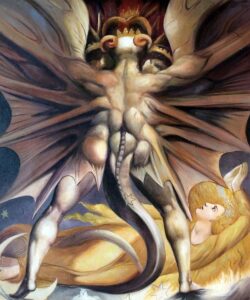 The covenant with many (a biblical prophecy given by the beast or God not sure which) is an agreement between darkness and light.  Tit for tat as they say.  Here is the story of that agreement.

Men built a magic device that reached into the realm of darkness.  Then they attached their problem solving quantum computers to the Great Hadron Collider.

This gave the men the ability to commputicate with demons in the Abyss.  Demons which they seem to trust.  “Commputicate” because they had to build a language they could both understand.  Or they used an ancient code.  It takes a powerful dark holding tank to allow demons a place to speak to humans.  Look at the name on the refridgeration box.  “Deman” is the transfigured name.  Upside down W is m.  Upside down v is N.

The powerful un-named men & women of CERN ownership demand more power, wealth, greed, ownership of all that is Gods created for God’s Children.  Their goal was to program the minds of every man woman and child on the face of Earth to do their bidding hook line and sinker.

These evil men were on the brink of finding a way to hack the human genome making all of mankind GMO humans.  But they needed one more symbol. THE PITCHFORK seen in the source code above.  Ya of all things.

The DEAL WITH THE DEVIL WAS MADE for the final symbol.  The covenant with many.  Many men many demons.  In return.  The CERN people had to agree to change the holy bible.  And to desecrate the minds of men by the allowing the strong delusion so all Christians cannot see or remember that their bibles are changing day by day into a blasphemous mess of vile and putrid desecrated words and precepts.

“God wouldn’t allow that!  He would not allow “his word” they call it to be changed.!”

Not only has He allowed it but He told us it would happen in prophecy.  Amos 8:11&12.  The famine of God’s words on Earth.  They call the desecrated holy books by God’s name.  Jesus is the on The Word of God. They proclaim the bible is “perfect”.  Pish posh.

The getting of the final symbol to create GMO humans happened…

Much like the movie Stargate.  Behavioral gene mapping was their directive.  There is possibly more to this invasion of humans regarding the substance graphene and nanotech bio-circuitry but I have not proven this aspect of degradation of humanity.  There are lots of stories about nanotech in humans on various video platforms.  Apparently, yes carbon from plastic can integrate itself with  the human body.  But for now we believe what is controlling the humans is the shot they took and the frequencies the towers are putting out.

“Graphene” is merely plastic recycled and burnt to its single atom carbon state.  It is not Graphite the element of rock that is formed in Volcanos.  Manufacturers are now putting Graphene in most things carried out of Wal-mart.  (translated Mart-Law=martial law).

Have they invented a third strand of controlling DNA to the human body using animal DNA and fast growing Cancer cells (immortalized cell lines in all the shots).  We think so.  Or if that doesn’t work the Cancer will just get activated by the human cells and bingo…you have fast growing Cancer in three years time.  Yes the writer realized that genome expression in real time manifestations takes years if it works at all to take precedence over nurture.  And that concerning behavioral and cell growth mapping, mitosis, replication, recombination these processes are very slow.  However with the Cancer Ace in the hole the process is speedy.

Back to the CERN problem.  The wicked men and women had all the symbols to invade and program human DNA except ONE.  Keep in mind mRNA is your controlling, commander station of your DNA behavior.  If your mRNA tells the cells in your body to recombinate into a mouse-man using mice proteins (dna) & viral vector with immortalized cell lines (Cancer) by fast growth Cancer tumor growth.  What these diabolical sons of bitches have done is found a ways to program dna using fast growth Cancer into an organized genome structure of DNA expression.  Both behavioral and physical (hair color, brain type ect.).  And that, my friend is bad enough even without the third strand of DNA theorized by many free thinkers.   The third DNA theory could be from the shills of hell put into place as an easily refuted idiocy.  If in fact it can be refuted scientifically.  Poised as Conspiracy theory.

Remember the elite know how to twist the English language making lies out of Truth.  Example.  “The chot does not edit your dna.”  Right, cause your own body does the changes.  “These vaccines do not enter the nucleus of the cell where our DNA (genetic material) is located, so it cannot change or influence our genes.”  So they say.  Yet chots are all about recombinating DNA.  And all about directing your DNA changes using either animal cell lines, Cancer cell lines, or unborn baby cell lines.  The elite use word play at every turn to defend their abominable mad science actions online.

And so the man who took the vaccine searches online and says “see the vaccine won’t change my DNA”?  The wtf did you take it for?  Its made allegedly to change the DNA into fending off the corona virus right?  The lies are un-ending.

Corporations DO NOT HAVE ANY RESTRAINT ON THEIR EVIL ANYMORE.

The prophesied “Restrainer of evil” is GONE.   My guess is that it was the “Harlot” who was the lesser of two evils called the Catholic Church.

Bill Gates of Hell is the obvious figurehead for the antichrist.  His mother’s name is Mary of course.  And He put out the vaccine in his name by patent.  Furthermore the False prophet The Oracle of Omaha literally put Gates of Hell into power.  The prophecies are fulfilled.  Of the mark.  The antichrist.  The False Prophet.  And the mark on the forehead is seen by the few.

“Since naked in vitro transcribed mRNA molecules were expressed in vivo after direct injection into mouse muscle, mRNA has been investigated extensively as a preventive and therapeutic modality [1], [2], [3].

Messenger RNA (mRNA) vaccines are designed to direct cells to express virtually any desired protein inside the host cells and tissues that can have a therapeutic or preventive benefit, potentially addressing a broad spectrum of diseases “

It was once prophesied in the bible that God would take His Holy Spirit from Earth in the end of days.  That prophecy no longer exists in the bibles.  However we believe it is soon to come to pass.  For just as the Lion of Isaiah 11:6 has left the bibles.  And now the wolf lies with the lamb.  So too God shall take His Lion’s from Earth who are walking in the footsteps of Jesus’ leading.  We hope to leave Earth very soon and go to a safe place where we shall then “Know as well as we are known.”  If your a Lion or have received the baptism of The Holy Spirit you too probably also have this feeling.  “His sheep know His voice.”