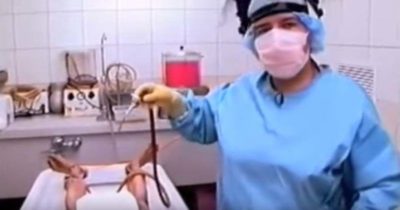 Perhaps if all men stood in on the brutal act they would rethink the LAWS of the Beast and its system.

Woe to those who see the Beast System in its true light.  It is a burden that must be bared, processed, and vehemently expressed both emotionally and spiritually by prayer/power/and tears and sharing with the empathic who listen and relate.

Like every other important moral act that should be left to Love and family the beast has hijacked death and exploited grief as a money making opportunity. The desecration of humans is sewn into place once again by the beast’s Laws of blasphemy and control.

Death of a loved one by LAW is taken out of the realm of Love, honor and Respect and put into the realm of Twisted Laws and sick Twisted Mad Scientists.  The Beast’s legal system has made it illegal to honor a man’s death wish at his death.

The MARTIAL LAW SHOULD HAVE NO PART IN DEATH EXCEPT THAT DEATH BE SUSPECT BY TWO OR MORE WITNESSES AS A MURDER, PERIOD!

The body must first be DESECRATED by LAW before the Loved one’s can put them into the ground.  Or the body must be BURNED.  BURNED if you don’t go through the wallet draining formation of the beast system’s DESECRATION process of death laws.

That’s right….if you want to keep your child or husband’s body sacred by a quick burial in the back yard, you can’t.  Either you must turn the body over to “AUTHORITIES” to be burned (which goes against Christian morality) OR you must allow the state to take charge again and send the body to a mortuary where they desecrate it at the fullest degree of blasphemy by cutting, and draining, and ripping, and tearing and then filling full of man made flesh eating poisons.

Just as the beast system has hijacked our food supply and poisoned it, stolen our best seed and desecrated it into Genetically modified organisms, GMO at micro-levels.  The Beast has hijacked the education system and educated out of us the most basic life preserving necessary skills of farming, planting and harvesting.

So the system also poisons the sacred earthen vessel that once held the Holy Spirit of God, the body.

We are greatly hated by those who control laws and survival on this Earth.  This fact is obvious when you look around and put all the puzzle pieces together.  Mankind’s destruction of his health and spiritual condition is by design.  This acknoledgement comes by a great awakening to the Beast System at large.

The puppet master has used human greed to promote his murderous lethal beast system of death and destruction. Greed is the spring board of the beast’s system.  If men put greed away our world would not be lethal.  Without humans the beast’s system would not function…at least until now.  But the way the world is set up now I think the beast no longer needs humans for the system to work.  Now the beast will further desecrate mankind by technology.  In comes the mark of the beast.

KNOW THEM BY WHO THEY SHOW YOU THEY ARE, Not by who they tell you they are.

They drain your bank account in the process.  If you do not succumb to the blasphemous desecration OF YOUR LOVED ON, THEN THEY WILL BURN THE BODY.  IF YOU DON’T PAY THE SICK MAD SCIENTISTS, THEY BURN.

FURTHERMORE YOU DON’T PUT DEAD BODIES OUT FOR DISPLAY funerals are further desecration!   Funerals should not include dead bodies out for display. This is both morbid and sick.  The body should be quickly buried.  THIS IS WHY IT DECOMPOSES…THE BODY SHOULD ALWAYS BE PUT STRAIGHT INTO THE GROUND AT DEATH.  This is God’s law.  KNOW IT!

The Beast System is Ruthless and Terrible Open you Eyes!

BESIDES WHAT THEY HAVE DONE WITH OUR SEED AND OUR FOOD THE DEATH LAWS ARE SOME OF THE MOST TELLING EVIDENCES OF THE BEAST SYSTEM’S SICK BRUTAL MOCKING MOTIVES THAT WE HAVE.

Furthermore Morticians jobs are by far one of the most demented and perverse acts called a “profession” that exists today besides “Lethal & Torturous Oncology” the cures for Cancer that by the way is man made are in nature.  Why do think they have pushed allopathic medicine onto the masses and defamed holistic homeopathic medicine by nature .   This is one of the sickest  heresies that is done to all humankind during the span of their time on Earth.

The beast has educated homeopathic medicine our of us calling it heresy.  When really its the allopathic medicine that is sick with its side effect and brutal lethal drugs and exercises of brutality and murder.  Doctors and scientists are some of the MOST Programmed brainwashed people on the Earth.  The beast mocks homeopathic medicine because THEY CAN’T PATENT NATURE.  Greed mixed with hate is the motive of the Beast.  He came to kill steal and destroy and he is doing it.

YOU CAN MEASURE THE SANITY OF A SOCIETY BY THE WAY THEY TREAT THEIR DEAD.

The body should be put into the ground as God gave his prophets the directions to do…..from the earth have you come and from the earth do you go.  The human is not the person.  The human is merely a host body for the spirit and soul of YOU.  YOU ARE SPIRIT just as our Father is Spirit.  However until a man receives the baptism of The Holy Spirit he is 33.3% incomplete and his number is 66.6.  When he receives The Holy Spirit the man becomes full at 99.999999%  But that is just one calculation of the number 666.  There is another.

What does that mean?  It means DON’T TAKE THE UPGRADE!  Take no biotech into your body lest you take the mark of the beast.

I find it apropos rather than ironic that the alleged inventor of the diabolical desecration of the former earthen vessel beholden of The Holy Spirit when living at death be desecrated by an invention made by a man called “Corps”.

This diabolical man if he even did do what history paints was Dr. Thomas Holmes who apparently received a commission as a captain in the Army Medical Corps (CORPSE) and was assigned to Washington, D.C. where he desecrated….embalmed many army officers killed in battle. He reportedly embalmed over 4000 soldiers and officers.

Why is the Believers Body Sacred?  Because it is/was the Temple of the Holy Spirit.

But we have this treasure in earthen vessels, that the excellency of the power may be of God, and not of us.

The Embalming of the Believer could easily be interpreted as the desecration of the temple.  Keep in mind the scriptures that now say “desolation” used to say “desecration”.

A mixture of these chemicals is known as embalming fluid, and is used to preserve deceased individuals, sometimes only until the funeral, other times indefinitely. Typical embalming fluid contains a mixture of formaldehyde, glutaraldehyde, methanol, humectants and wetting agents, and other solvents that can be used.

Would you do this to your child even AFTER DEATH?  NO!  Hell no!  Any sane human being would not choose this utter disgusting desecration of the human body for a loved one IF IT WERE NOT BRAINWASHED, PROGRAMMED INTO THEM THAT ya!  That’s what EVERYBODY DOES SO IT MUST BE RIGHT?

After all MAJORITY RULES and among the peer pressure anything fargin goes!

I do not give a darn tootin how bad these ailing wives wanted the bodies of their dead husbands so they could have their traditional funerals…NO I don’t care!  Its just not right to do this to anybody.  FURTHERMORE its all about MONEY and making a fortune off every man woman and child that dies.

Did you know its ILLEGAL TO BURY A MAN IN THE GROUND AS THE BIBLICAL INSTRUCTIONS GO?   That is….not without DESECRATING THE BODY FIRST AND GIVING THESE SICK TWISTED AND DEMENTED MEN WHO CALL THEMSELVES MORTICIANS.

And god only knows how many of these sick desecrators of mankind do god only knows what else with these bodies in their trust as the stories GO and go.

One of the Sickest Professions so far

A Mortician prepares deceased people for wakes, funerals and interment by embalming, dressing, cosmetically enhancing and casketing them. In smaller funeral homes a funeral director, who owns or manages a funeral home, performs the duties of a Mortician. Also known as Embalmer or Undertaker.

The TV brainwashing machine likes to pain a nice pretty picture.  Oh yes these men (morticians) are “CARING FOR YOUR LOVED ONES”

Like I said its selfish and sick to want to desecrate a human body just so you can prolong the time to have the funeral.