Jesus said “be angry and sin not”.  He Turned Over Their Tables of Greed.

We Who See the abomination of desolation of God’s holy words are Living This Story.  While the Christians quote and side with Twisted New Scripture.  Scripture that is Supernaturally Destroying All Holy Bibles.  Those who quote aloud hateful new scripture & curses trample asunder the holy place. 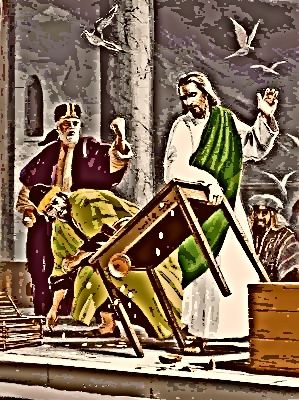 And Let’s face it The KJV Bibles were never perfect at least, not in my lifetime.   But now be careful not to read aloud the many hateful curses in the defiled books.

It was religion/legion which Jesus detested.  Because Legion/Religion detours mankind from seeking God due to their corruption and hypocrisy.  Jesus new Legion would lead many away from Godly worship for good.   The “Legion” story is also skewed.  Obvious to me, one of the horrible evils on Earth is Religion/Legion and they are many.

The bibles had their propaganda infused among the sacred holy words all along.  Not all the words were inspired by God given to men.  Namely I refer to  the “Israel” propaganda making God owner of only one country and one group of ethnic people.  Pish-posh.  All the Earth belongs to God.  It always did.  It’s men who choose evil by whatever name you wish to give it.  Political entities are not sacred.  Israel is just as corrupt as the rest of the political institutions on Earth.

Preacher in the U.S push Israel worship.  They exalt Israel’s people over other children of God’s.  “Israel on the most part meant God’s children”.

God Loves all of His children no matter where they are born.

“The Holy Spirit will lead you into all Truth.  “Serve God not men”.

The Desecration of the Temple

Jesus did not carry a whip as the books now reflect.  He was not violent toward people to chase them around with a whip.  That would be the New Jesus who God warned us about who had the whip.

But don’t expect your local pastor to notice the difference.

Those who see the supernatural bible changes for the blasphemy that they are also are pissed.

We see the desecration of God’s chosen Old English dialect in the KJV bibles along with the defilement of the very precepts of God.

It befuggles us that those who proclaim themselves as being Christians are blind to the desecration of the temple.  And so they are the mouth piece for that desecration quoting the defiled scriptures as being what they call “The Word of God”.

While only Jesus is the True Word of God.

We are walking the walk of Our Lord.  “These things I do and greater than these shall ye do”.  He is returning in a way that will surprise many.

God is not predictable and neither were the prophecies at all predictable.  The fulfillment of the prophecy is not happening like Hollywood portrayed.