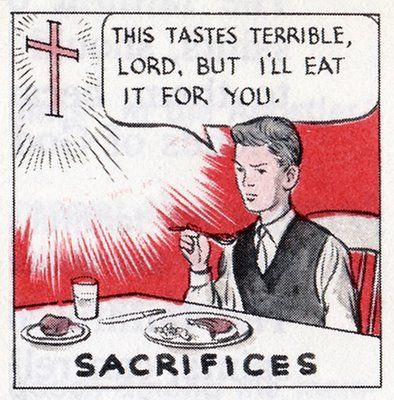 Back in the Old Testament regarding sacrifices to honor God the believer was not permitted to EAT any animal sacrificed to God. Does it not defeat the whole purpose?

To take their prized bullock or lamb that would feed the people for weeks or months sacrifice and call it as a gift of gratitude to God and then eat it?  No that’s not the point of sacrifice is it?  Not to mention the sin aspects.

The blood was supposed to atone for the recent sin some what like confession cleanses the body of guilt.  So the animal given in honor of God cleansed the man of sin.

So if he takes up the sacrifice and eats it …well he just consumed the very sin he was trying to overcome and be rid of, cleansed of.  IT MAKES NO SENSE TO EAT A SACRIFICIAL ANIMAL.

Yet in Exodus 12 not only do they eat the lamb but also supposedly/allegedly God Himself tells them how to cook it.  As if God is a chef of some sort giving cooking directions.

The book has fallen.  Its vile and become more vile every time I read it.

To eat it would be an abominable act of defiance and debauchery.  Not any more according Exodus 12.  And as usual the next supernaturally changed text is vile, bloody, sick, perverse, and satanic at best.